What Different Cultures Do Most And Least in Mobile Messaging Apps

What Different Cultures Do Most And Least in Mobile Messaging Apps

The following results are based on 250 survey participants from 4 cultures, answering each 40 questions about their mobile messaging app (MMA) behaviour from November 2013 to January 2014. The results can be seen as a hint to potential existing tendencies in the field of mobile messaging apps and should be verified by further research. 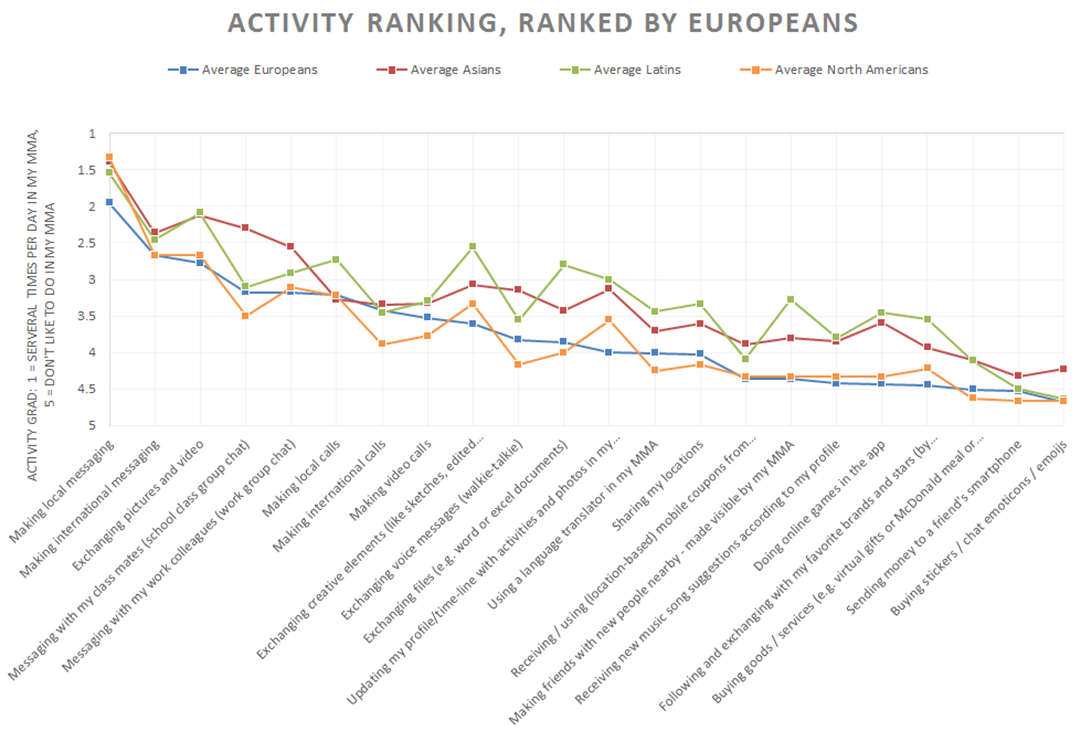 The high correlation value of the activity rankings between Asians and Europeans/North Americans illustrates that Asians, European and North Americans put, in many cases, emphasis on the same MMA activities, but the difference is that Asians use the MMA features more often than Europeans and North Americans. This similar emphasis on MMA activities could be interpreted to the scenario that the MMA hype from Asia could find reasonable further adoption in Europe and the USA, just on a slightly lower level of activity.
In the top activity ranks are no surprises. Messengers are mainly used for their core functions: messaging.
The gender ranking is not shown here as the results between the genders are too similar, proofing that men and women are to 80-90% equivalently active in messengers.

The activities in MMA with highest % of answer ‘no, I don’t want to do this in my MMA’ by Europeans:

Surprising is that ‘buying stickers’ is least popular with all cultures (Asians have a slightly higher affinity). Though stickers are a big real success story for MMAs.

The activities in MMA with highest average deviation across cultures (biggest controversy):

General consumer indifference can be noted in the activity ranking long tail.