Update 31st August 2013: An interesting figure has come up in the ‘religious war’ between messaging-only-strategy (WhatsApp) and messaging-plus-VAS-strategy (WeChat, LINE) to create monetary value for the mobile messaging app companies: Tech-blog The next web has recently stated that WeChat had in May 2013 more than 400 million users but only 195 million monthly active users. This means that only 50% of the people who download WeChat messaging app also use it once or more per month afterwards, which again means that 50% of the downloaders would not use the app. This is are a rather clear failure statement about the front-end success (fast increase of users) of the aggressive marketing campaigns which WeChat (and LINE) currently are executing. On the contrary, this usage figure is not known from WhatsApp, but e.g. with a similar calculation with Germany the usage rate is at 75%.

Another symbolic decade change is happening: Whatsapp is just passing Microsoft, and Skype soon, too, in search popularity according to Google Trends. These are the signs of disruption by mobile solutions. In below Google Trend chart is also visible that WhatsApp is undisputed mobile messenger leader in the western world. Strong competition comes from WeChat (China) and LINE (Japan), both are not or only partly reflected in their homemarket by Google Trends.

6th August 2013: WhatsApp has told AllThingsD it has 300 million monthly active users now. With an astonishing growth rate of 340% over the last 14 months (June 2012 – August 2013). This makes WhatsApp the most popular mobile messaging app outside China in the World. Only QQ NN mobile has more mobile MAU (478m MAU). 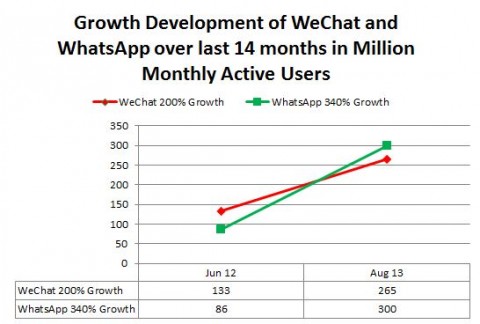 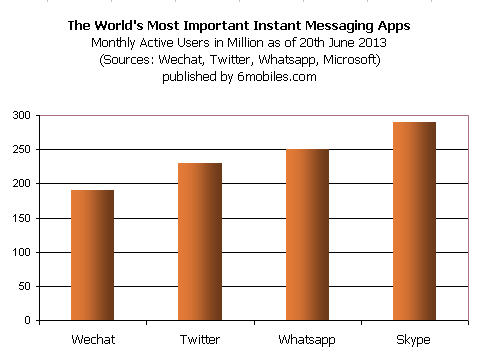 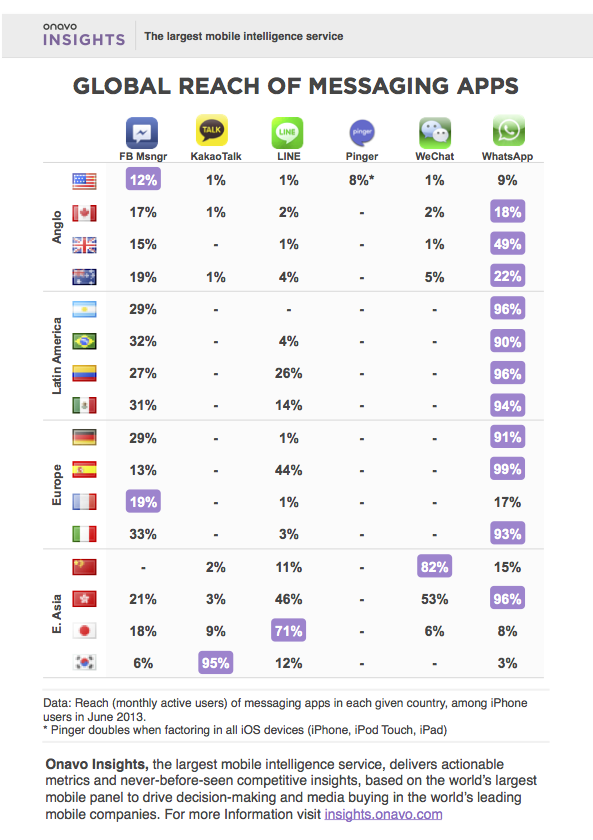 User Growth
The development of WhatsApp started in February 2009, the app was eventually launched in July 2009. By end of 2009 the app had reached 1 million users. In October 2012, WhatsApp was at 100 million monthly active users. That was the first stage of early hypergrowth.

The time from October 2012 to August 2013 represents a second-stage growth period with still explosive growth of 200% within 10 months. This explosive growth was also fueled by 1) the boom effect on app distribution platforms in 2013, where the monthly app download rate in general doubled from 2012 to 2013, and by 2) the growing global smartphone penetration rate. More stats on users.

Strategy and Marketing
WhatsApp has a crystal-clear utilitarian strategy on messaging service above all, without ads or games and less emoji, provided on all possible mobile platforms (no desktop version) and in as many as possible languages, in order to guarantee optimal user experience.

WhatsApp does not advertise itself, their success is due to word of mouth. “You trust a friend more than any other source, right?” asks Brian Acton, co-founder of WhatsApp. On 12th August 2013, Kate Perry’s new music video ‘Roar’ was released; the clip is almost entirely told by WhatsApp messages. WhatsApp management says it has no endorsement deal with Kate Perry. The inspiring music video will support the global adoption of WhatsApp.

This no-marketing-strategy is in strong contrast to the strategies of WhatsApp competitors Wechat and Line. Wechat has a broad advertising campaign with Lionel Messi (Spain, Europe and South America). The ad would be aired across 15 nations soon. LINE works with special TV ads for each national market. The TV ads promise ‘Life is more fun with LINE’.

Pricing and Revenue
In the App Store, WhatsApp changed various times its pricing strategy. It started as free app in some national App stores (eg. Switzerland) and in other national app stores as paid app (eg. in the UK the app costed GBP 0.69 since December 2009). Since March 2013, the app costed $0.99 one-time fee in the App Store in all/most countries. On 16th July 2013 – only 4 months after the new pricing – WhatsApp changed the price to ‘free for the first year, but charges $0.99 per year after the first year’. This is the pricing model which WhatsApp used in Google Play ever since 2009.

In Google Play, WhatsApp only used one pricing model since its start in 2009. The app is free for the first year,  but charges $0.99 per year after the first year.

The recent pricing decisions will create an annual revenue for WhatsApp in 2013 of approx. $100m from App Store and approx. $50m from Google Play. This pricing decision shows that WhatsApp wants to build up substantial long-term revenue.

The pricing itself is subtle: first the friendly offer, a consumer can use the app for free for one year which facilitates downloads of the app strongly, then after 1 year, when nobody wants to miss the app anymore, the pay scheme triggers in (as opt-in), but the annual USD 0.99 fee is low. Most of the WhatsApp users will never make any considerations about that.

Features updates for WhatsApp
On 8th August 2013, WhatsApp introduced voice messaging (walkie-talkie) to its solution, a reduced-to-the-max one tap functionality. As long as WhatsApp is not enabled for VOIP, this solution can help to facilitate the texting exchange in languages that are less simple to type (eg. Cyrillic).
On 29th Agust 2013, WhatsApp provided an APK download for the WhatsApp version 2.11.49, including some simple video editing tools. No pro tools, but it will allow users to splice and cut different videos to a certain length without having to open up a new app.

Competitors
In the new field of mobile messaging apps, Whatsapp has various rivals. The strongest competitors are Chinese originated ‘WeChat’ (with approx. 235 million MAU in August 2013, with approx. 40% (100 million MAU) of its users outside China).

There is another circle of competitors: the instant messaging tools that started originally as desktop tool, but have also gained many users for their mobile app version:

Update, 25th August 2013
Initial post from 25th June 2013: Swiss telco Swisscom has just launched the independently developed free messenger and VOIP app ‘iO’ that competes with WhatsApp. After SK Telecom, KT and LG Uplus (South Korea, December 2012) and StarHub and SingTel (Singapore, February 2013), Swisscom is another innovative telco that tries to win back the customers that it has lost to WhatsApp with an own tool.

The whole story of iO Messenger’s development by an internal Swisscom innovation team and the American creative company Moving Brands can be read here.

In comparison to WhatApp, the free iO Messenger app can also be used to make VOIP phone calls. Swisscom even additionally sells a Swiss flatrate of CHF 15 / USD 15 (to call all subscriber in Switzerland who are not subscriber to iO Messenger) as well as an European flatrate for CHF 25. But on 30th August Swisscom confirmed that it has not yet launched the paid flatrates because the quality of iO messenger service is not stable enough yet, 2 months after the product’s launch. The flatrates are planned for September 2013.

On 16th September, the first app update was released, 2.5 months after the start of the app. Among the updates was that pure voice-over-IP calls are encrpyted.

An advantage for the customers is that the messaging data is stored locally, within Switzerland. The iO messages are SSL encrypted – opposite to WhatsApp that only uses an MD5 hash of the phone’s IMEI number in reverse format.

Enabling feature
Another difference to WhatsApp, iO does not require the user to download the entire address book on a central server. But downloading the address book on a central server is what makes WhatApp so simple to users and it helps enormously in growing user penetration because this enables Whatsapp to show users immediately who of their friends are using WhatsApp, too. iO Messenger can’t do this feature; in iO each contact/chat request is handled individually to see whether the addressed person also has iO installed.

Image
The iO messenger app saw a image damage when newspapers disclosed that Swisscom sends anonymized user data for analytics to USA. This fact was for many iO starters in clear contrast to the earlier stated Swissness and security strategy by Swisscom, which again led within this user group to less activity on the app.

Strategic Options
Swisscom announced that the group chat feature will follow soon. This is the start of new unified messaging platforms. Swisscom could also act with an MVNO offer over iO Messenger. Sure that several further rateplan offers will be launched through the iO Messenger app, but adoption will take time.The former telco monopolist in Switzerland writes in the analyst report Q2/13: ‘New tariff systems will make Swisscom invulnerable against OTT threats’. Geofencing and location-based services will sooner or later be a competitive advantage of regional messaging tool providers. When will the telcos add a virtual fixnet number for these mobile platforms?

Makes a daily download rate of 16’660 in the first 15 days of existence, with a slowdown to 1’650 downloads per day in the following month.

There are no official/public figures regarding WhatsApp penetration within smartphone users in Switzerland, but it can be assumed that the WhatsApp penetration rate is as high as it is in Germany (91% in iPhone user). Especially if one considers that Switzerland has with more than 50% one of the highest iPhone penetration rates globally within smartphone sales. Under this constallation, it is clear that it will take a long time until iO Messenger could be a real competitor to WhatsApp in Switzerland. However, Swisscom has good possibilities and the funds to play the local hero with new (regional) features in mobile messaging.

Conclusion on 9th August 2013
The io Messenger app had a good start in terms of numbers of downloads, but most people don’t have much of a clue what to do with it when about 80% of their friends already use WhatsApp for mobile messaging. But this is only the first step of a new telco tool. Above all: Swisscom has made a very innovative statement to Swiss customers who have, in general, a very high affinity to innovation and quality.

Even though Ovum, an international telco strategy consultancy, urges telcos to collaborate for messaging interoperability in the combat of OTT providers, and to use messaging standard JOYN (which has been initiated and promoted by GSMA), Swisscom has decided to develop its own messaging tool. The reasons may be in slow progress in international decisions and collaboration, the wish to make independent decisions, national image emphasis, and low graphical adaptability of the industry solution. Companies like Vodafone, Deutsche Telekom, Movistar, Orange, MetroPCS already use the industry solution JOYN. JOYN also struggles with popularity within the GSMA members as many MNOs (especially in emerging markets) have started to co-operate with WhatsApp in creating new rateplans together.