Read this post to see which mobile messaging app is the winner of current 2013 and who did especially well in Q3/13, and which messengers work best with telecoms. Furthermore, get to know WhatsApp’s comparative advantage: a ‘lively’ communciation interface.

In the daily novelties about new user numbers and new features of boasting mobile messaging apps, it is hard to keep the overview of how each of the mobile messaging apps (MMA) is really doing compared to the others. This summary of the 5-year-history of OTT MMA by 6mobiles.com provides an overview of how the user bases of the 9 most important MMA (by size of user group) have developed. 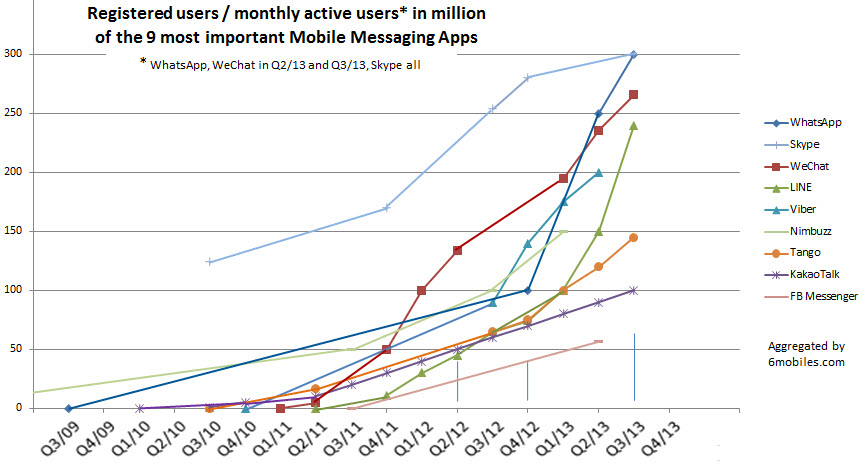 For the time from Q3/09 to Q1/13, this chart is based on registered users. In 2013, the first MMAs started to report monthly active user (MAU) numbers (WeChat from Q1/13, WhatsApp from Q2/13, Skype all figures in MAU, but desktop+mobile). The sources for this chart are MMA websites or trusted press articles.

Who is the winner of Q3/13?
LINE has added about 80 million registered users in the last 3 months (and about 165 million registered users over the last 12 months). This is a proof of their effective regional customized TV and print campaign. Whether these registered users will turn into MAU we will know once the company will disclose its MAU figures. However, LINE states that 80% of all registered users are MAU in July 2013, which would suggest that LINE has a higher user engagement than WeChat as this ratio was at 50% for WeChat in May 2013. LINE has big plans: it wants to become the first global Internet company from Japan/Asia. The company has already stated that it will make revenue of approx. US$100 million in Q3/13. This revenue is high compared to the revenue of WhatsApp which mainly comes from annual app subscription fees (and telecom collaborations). But putting the amount into relevance to WeChat’s 2nd quarter 2013 e-commerce revenue of US$ 359 million, the sum is decent.

Who is the winner of 2013?
WhatsApp added about 200 million MAU in less than the last 12 months (added about 60 million in the last 3 months). The specialty: WhatsApp does no ads, no marketing campaign, no games. This concludes that users are seeking easy-to-use, single-minded communication tools. But the strong user base increases of LINE and WeChat prove that users are also highly interested in more than a MMA only. And what results will Viber, WhatsApp’s most direct competitor, deliver soon? Viber stands in the shadow of the others as it has not published new user figures yet (which probably means they are falling behind) but, strangely, with messaging and voip calls capabilities, Viber even can do more for the user than WhatsApp. Therefore it would be very insightful to understand through consumer research what is WhatsApp’s superiority regarding product and (no) marketing. Read further down about the comparative advantage of WhatsApp’s ‘lively’ communication interface)

WeChat (China) or LINE (Japan) vs. WhatsApp (USA) or Viber (Cyprus)
WeChat and LINE go similar ways as mobile social network apps (MSNA) with official brand accounts (which need to be paid by brands), that can be added by users for information, interaction and benefit sharing reasons. Both of them are sustainable ad business models. It will be very interesting to see which one will win in Asia – and abroad. Whereas WhatsApp has a different positioning as highly functional tool focused on messaging only.

The mediocre result (see here) of KaokaoTalk’s campaign in Japan 18 months after Line’s Japanese launch is a hint to the possible scenario that two similar mobile social network apps (MSNA) will not coexistingly be downloaded as there is too less differentiation in the user benefit. Furthermore, a user mainly tends to update only one timeline and tool. WeChat definitely has its huge Chinese potential user base all over the world, whereas LINE, very recently, apparently has been able to create a higher coolness factor among European and American youth. The figures regarding global expansion success give a clear trend: LINE has about 180 million users (outside Japan), WeChat has 100 million users (outside China). The race has become sophisticated between the two Asian competitors, who both aim for the global leadership in MSNA rather than in MMA. This was recently best portrayed in the situation that WeChat – as first-mover – had a TV ad endorsement contract with Lionel Messi, but LINE just released official stickers of all players from FC Barcelona and Real Madrid. The Spanish football league is of high strategic relevance for the conquest of Europe and Latin America as well as for the assumed user messaging during the football world championship next year. So when the race will go into its next phase the battle about the users’ choice will be more fierce between WeChat and LINE than between the two and WhatsApp. But WhatsApp definitely has to develop a stage-2-plan of its value proposition. (Note: The figures in above graph are MAU for WeChat and registered user for LINE.)

First-movers and fast followers – but the race is just entering its most pulsating phase
The chart reveals that Nimbuzz was the first mover for MMA (Nimbuzz launched their first apps for Java and Symbian phones in May 2008, iPhone app followed in November 2008), followed by WhatsApp in July 2009, by KakaoTalk (6 months after WhatsApp), Tango, Viber, WeChat (1.5 years after WhatApp), LINE. So WhatsApp has an advantage of 2 years against LINE in collecting users.  Nevertheless, the MMA industry also proves that – even with 2 years market launch disadvantage – an app can strongly catch up in terms of gaining new users by marketing campaigns, especially if the market leader is relying on word-of-mouth only to propel its solution.

It’s visible that the MMA big boom started in the second half of 2012, with WeChat as a forerunner of exorbitant user growth (due to the vast number of mobile users in China). In March 2012 WeChat was the first MMA to reach 100 million registered users, after only 14 months of existence (start record). Most of the MMA exhibit the same ramp-up speed in terms of user numbers. In their beginning phase the most performing MMA were WeChat, LINE, and Viber. The slowest ramp-up start revealed Nimbuzz, KakaoTalk (due to its initial limitation to South Korea) and FB messenger (probably due to the fact that they were the lastest among the top players to enter the MMA market; only Google was even later with their launch of Google+ Hangouts mobile app in May 2013, as a followup to Google Talk that was activated in 2005).

The chart also exhibits that 100 million users are the threshold for critical mass. After this user group value growth has been exponential for WhatsApp, LINE, and Viber, driven by enlarged network effect and global media coverage.

The race for global leadership in MMA will be decided between WhatsApp, WeChat, LINE, (and Viber?). Tough Skype first needs to show new momentum to be counted in. In October 2012 Skype CEO Tony Bates announced that Skype would target 1 billion users. Seeing Skype’s recently growth flattening in the graph, it seems like the MMA have put a spoke into Skype’s wheel.

Collaborations with telecom companies
WhatsApp’s strategy to focus on messaging app features only and to stick with a clear value proposition makes them a pole-position partner for service and data bundles with telecom companies; to be contrary to the mobile social network apps like WeChat and LINE. WhatsApp is currently very active with telecom partnerships in emerging regions like Africa and Asia. Nevertheless, there will also come the time for mobile social network apps (MSNA) sooner or later, once they have proven sustainable and active customer bases as well as the development of MSNA is better understood by marketing experts. It must be in the interest of telecom companies to cooperate with MSNA because their features generate much more data volume than messaging only, therefore the data rateplan or flatrate revenue for telecom companies would be higher with such products. A recent poll with 40 mobile carriers (conducted by moiblesquare) found that 36% of the polled telcos said they are going to partner with OTT providers this year, up from 32% in 2012.

So what is the comparative advantage of WhatsApp?

Lively vs. dead instant messenger interface
A test of all the big MMA tools by the author showed that WhatsApp has the most ‘responding’ communication interface. This works on three parameters:

1) It shows when a person was last time in the app or is online in the app. WhatsApp indicates ‘online’ only if the user is really in the app with the precision of seconds, and it does not show ‘online’ if the app is just running in the background (like Viber and FB Messenger do, which is not a timely indicator of actual user presence in the app).

2) Delivery reports belong to the standard meanwhile. While two ticks do only mean the message has been delivery to the server of the recipient. But if WhatsApp is running in the background it would push a notification on the topscreen of the mobile in that case.

3) It shows when people are ‘typing’.

Internal qualitative study (to be released in November) concludes that these three facts are very strong communication enabler, and they are only done by WhatsApp in the most accurate and proper manner, even to the extend that the timestamp ‘last seen …’ can be disabled/enable by users individually within seconds and not just once a day like in Viber. Interesting is that neither WeChat nor LINE support this helpful features. For WeChat it could be in dissonance with finding new friends nearby (location-based information), as user want to keep this sensitive information to their friends only.

Why has Viber lost against WhatsApp in terms of user numbers?

Why could KakaoTalk not win much in Japan after LINE?
KakaoTalk launch in partnership with Yahoo and TV campaign in December 2012 in Japan, 18 months after the launch of LINE in Japan. But competition could not be put upside down: In September 2013, KakaoTalk has about 15 million registered users in Japan whereas LINE has 46 million registered users in Japan, where smartphone population lays currently at 80 million. This maybe a hint to the point that two similar apps would not be able to win many users from each other nor that market shares can be changed dramatically.

How did WeChat their growth marketing in China in 2011/12?

How could WeChat generate a ecommerce revenue of US$359 in Q1/13?

How can marketers use the new mobile social networks?