An Inconvenient Truth for the MIT Mobile Summit 2013

The Reality about Viewing Timeshifted TV, and How Much Time Americans Spend with TV Media?

Below chart has an interesting statement even though the chart is not focused on mobile usage only. In the IPTV industry, there is the concept of traditional TV and timeshifted TV, which suggests that timeshifted TV consumption will soon be the main share within TV watching; as viewing timeshifted TV is regarded by the IPTV industry as one of the biggest advantage of IPTV. But this chart from 2012 tells the opposite: The group with the lowest ratio between traditional and timeshifted TV are the 25-34 year old viewers (124h50m vs. 14h54m –> about 8:1), but these viewers still watch 8 times more traditional TV than timeshifted TV. Interesting is that, with teenagers, watching videos on the mobile is as popular as watching timeshifted TV. For sake of completeness, it should be mentioned 1) that there maybe missing a max. 12% share of web viewing, and 2) that the USA is a rather difficult environment in terms of legal freedom to deliver timeshifted TV content (a new positive light in opening competition in IPTV is the dispute around Aereo).

Another stats from Motorola Mobility says that 29% of television watching is time-shifted. Most often one will find a stats which is contradictory to the statements of another statistic. 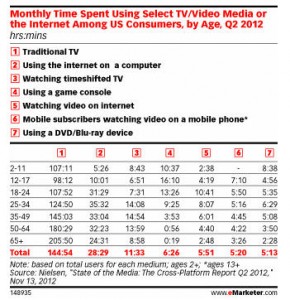